In the previous article, we get an overview of how bytecode is executed in a stack machine.

In this article, we continue to dive into the details of a different scenario: Variable declaration.

In the simple language that we are designing, there will be 3 types of variable declaration:

In the following program, we have all 3 declaration types above:

Let’s take a closer look at each case to see how would the bytecode compiler compiles them.

Inside the stack machine

Aside from the data stack, a stack machine needs to store other information that will be used for the execution, different implementations have different ways to store them, but generally, we can think of them as the 3 tables:

To work with these tables, the instruction set usually contains these opcodes (these names are inspired by CPython’s opcodes):

Now, we are ready to dive into each variable declaration type.

Variable with a constant value 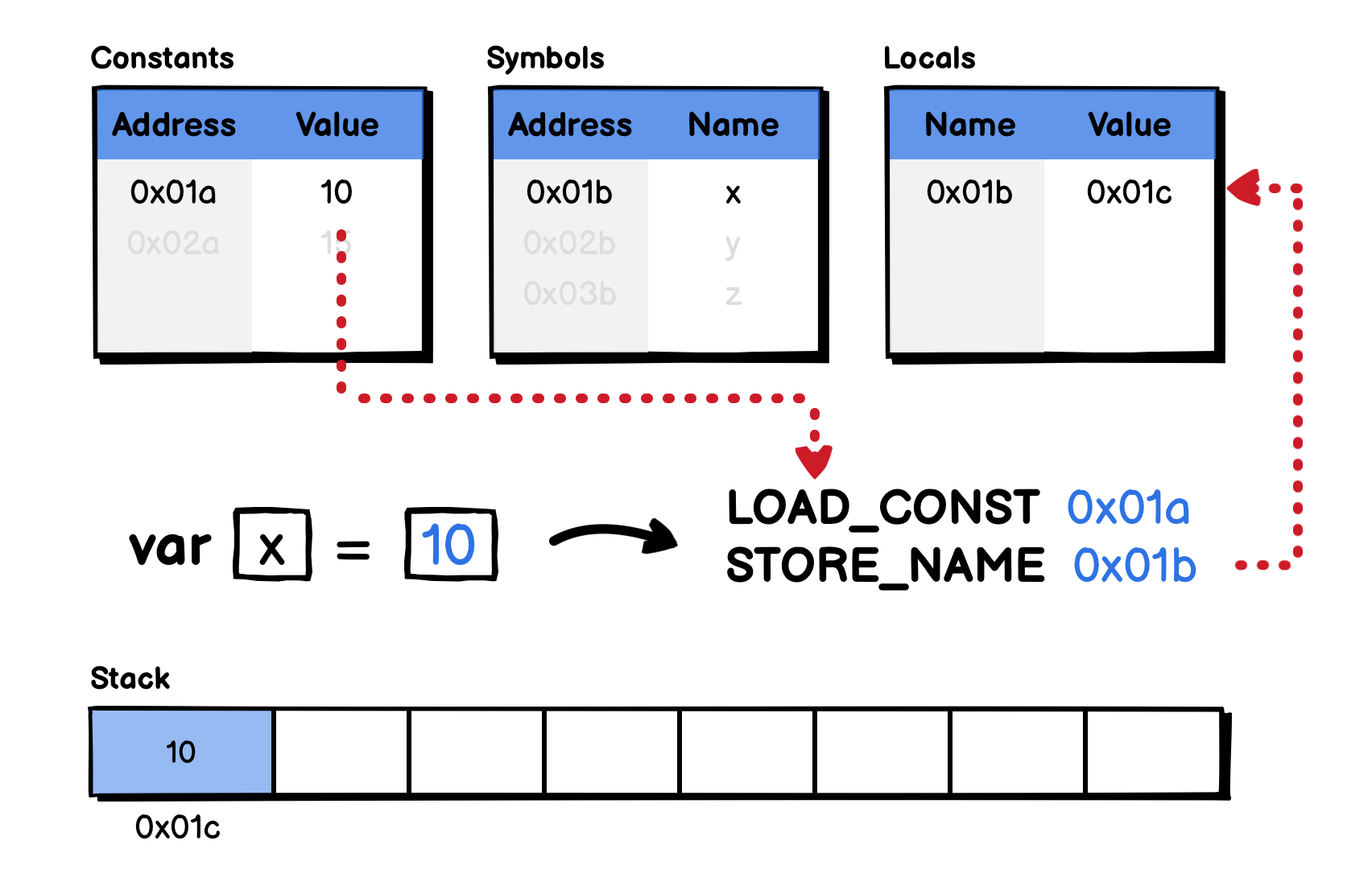 Then, the expression var x = 10 will be transformed into two instructions. The first one is LOAD_CONST 0x01a, which loads the constant at location 0x01a into the top of the stack, which is the number 10. Then, the STORE_NAME 0x01b instruction map the address of the value on the top of the stack with the symbol located at 0x01b — which is the symbol x.

Variable with a value from other variables

Another scenario is when we define a new variable, and assign it with the value from another variable. For example, var y = x. Same as above, during the compilation, the symbol y was also created in the Symbols table, at the location 0x02b. 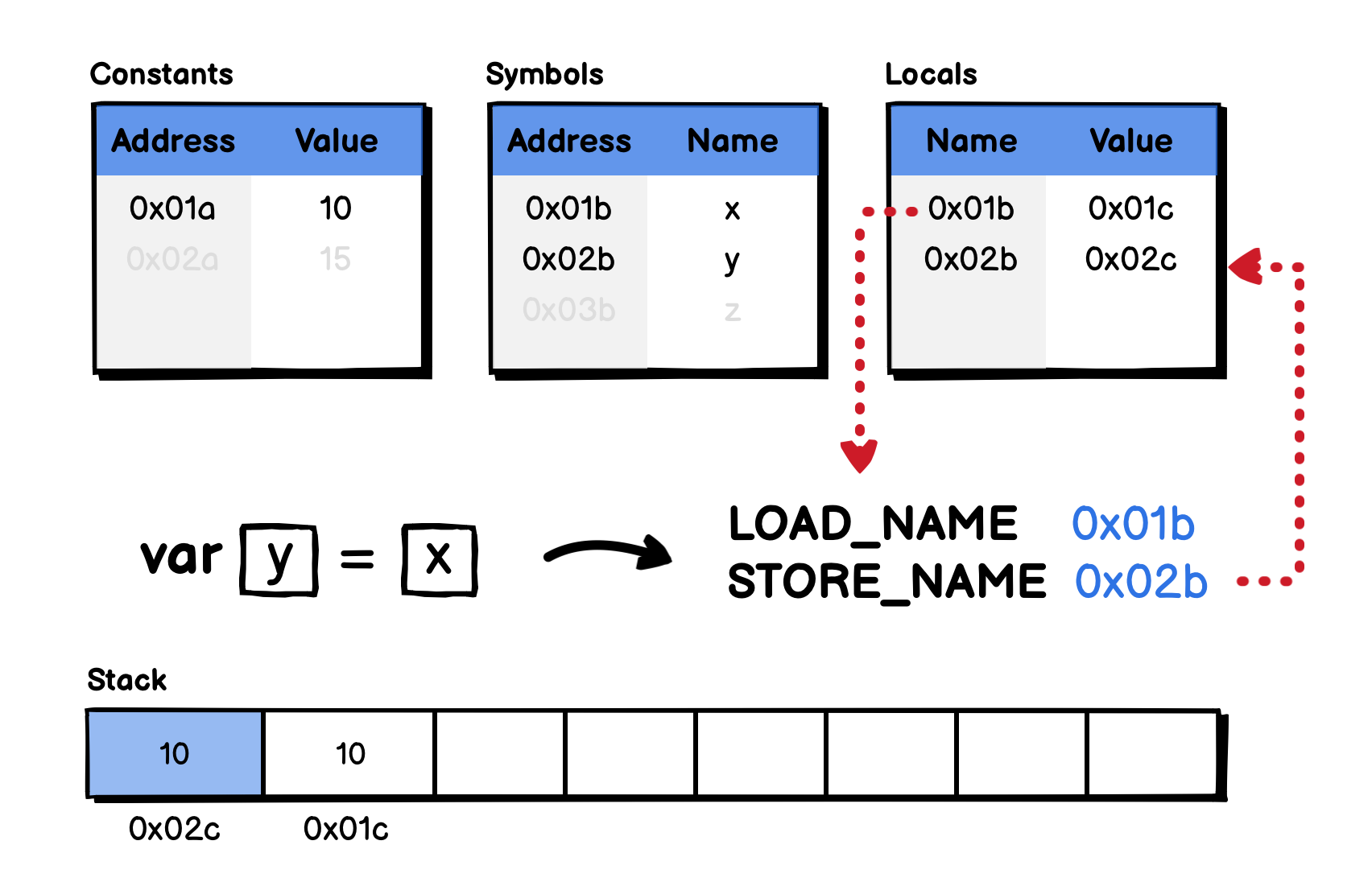 Two instructions will be generated. The first one, LOAD_NAME 0x01b, will look at the Locals table, retrieve the referenced value mapped with the symbol at location 0x01b — which is the value 10 (at location 0x01c on the stack), put it to the top of the stack. Then, the second instruction, STORE_NAME 0x02b, will map the location of the top of the stack with the symbol at 0x02b and save it to the Locals.

Variable with a value from an expression

Next, consider the case when a variable is declared and assigned to an expression, the expression may or may not contains another variable. For example, var z = 15 + x. 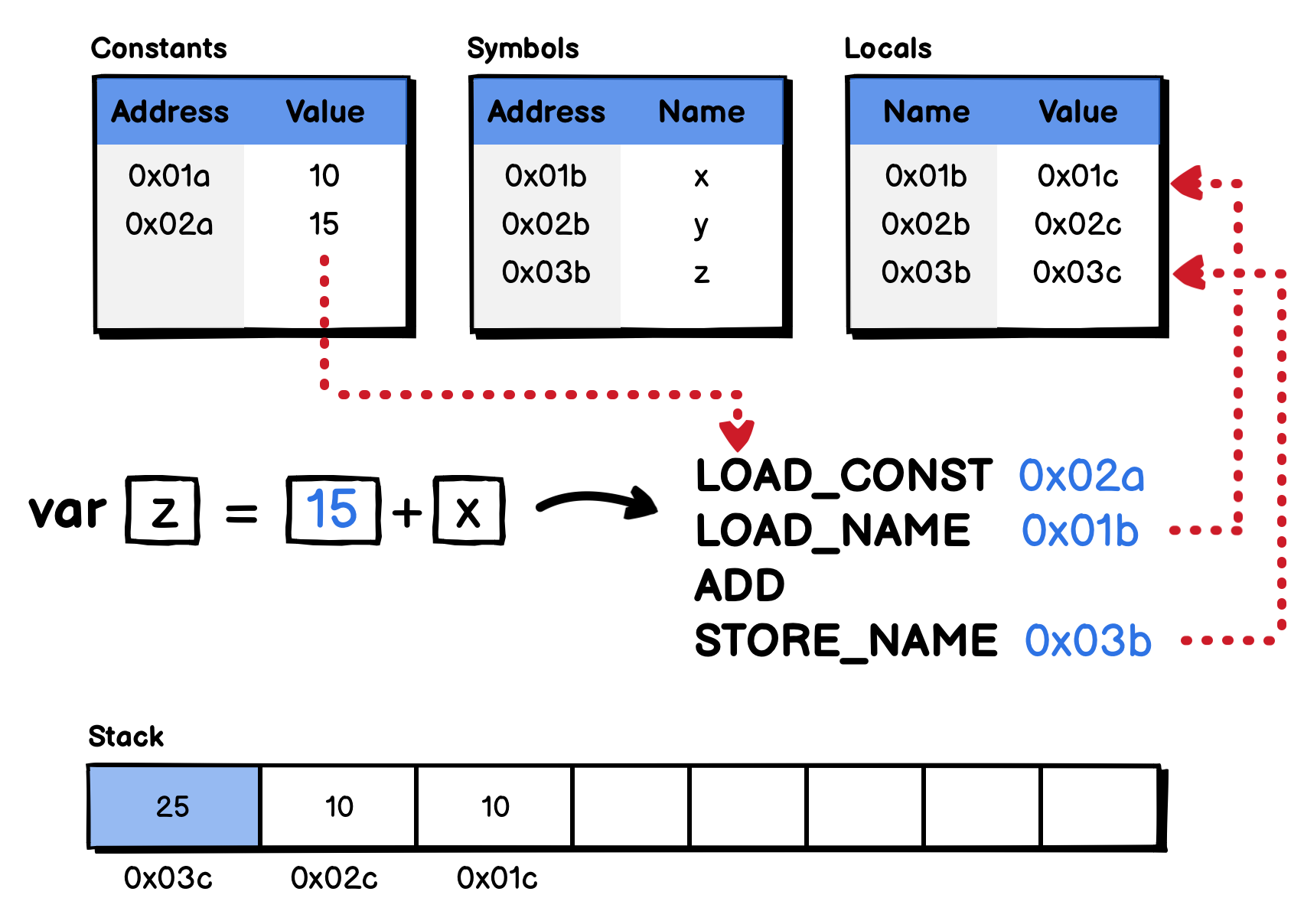 Remember that, all bytecode is generated in the way we write Reversed Polish Notation, the above statement would become 15 x +. And it would be transformed into a series of instructions as described in the above diagram.

Finally, the STORE_NAME 0x03b instruction saves the location of the top of the stack into the Locals table, with the name of the symbol at 0x03b.

In the above examples, we see that when a variable is created, the assigned values are copied from other variables. In reality, we may need to create a pointer that referenced some other memory location. This is a much more complex case that requires us to handle many different aspects of the language, so it will be a topic for another article.